Wintertime Tour: Week One – The Mid-South

Hey! Brian here. My wife and I are currently on a two month tour across America, playing music, (we’re The Wallens) camping out, and seeking adventure along the way.  I plan to document some of our shenanigans here on our blog, and hopefully show you a little bit of what we see out on the road.

We loaded up the truck and started our big trip with a visit to…Draffenville, Kentucky! Molly’s grandparents live just outside of town, and she went to college about 25 minutes away at Murray State, so a stop to visit friends and family was in order. We set up at the Stagecoach Station Campground for a couple of nights. 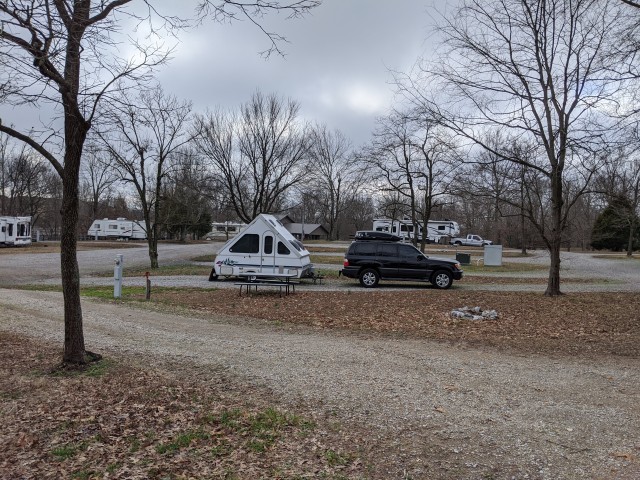 We had everything we needed, including some of the nicest campground bathrooms we’ve come across. I was particularly excited to test out our newest addition to Alf, a TV that I got for Christmas from my lovely wife. We picked up all the local channels via antenna, and we were even able to stream the College Football Championship via campground WiFi!

It was really great to visit with Molly’s grandparents, and we got to hear some stories that would hit home a couple of tour stops later.

We headed down the road a few hours to the birthplace of Elvis, and the namesake for that sweet southern honey. We camped out at Barnes Crossing, which had about 50 channels of cable! So, we spent the afternoon watching Forged in Fire on the History Channel and listening to the rain outside. Later that night, we played a funky little room called the Blue Canoe.

Some heavy hitters have played there on their way up, including Sturgill Simpson, Shovels and Rope, and Alabama Shakes. The venue has a tradition of having every artist write their name on the wall, which was a cool way to see a lot of history all at once. You could tell that the audience was music-savvy, and our soundman, Preston, had everything dialed in. It was a perfect way to kick things off! 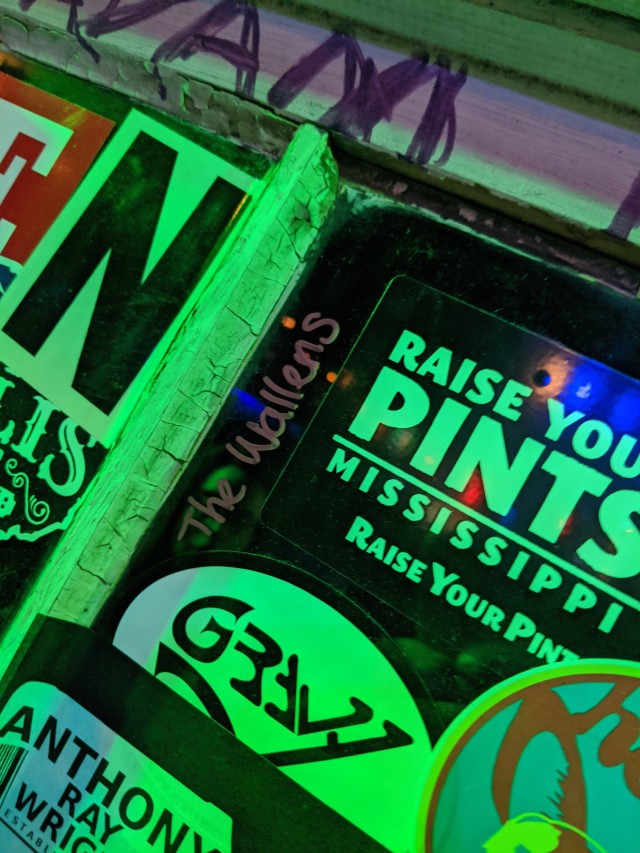 Next up, we headed to the Cotton State and a most unique campground location. We set up at the Space and Rocket Center RV Park, bordered by giant Saturn rockets and even a space shuttle. It wasn’t hard to find! Our show that night was at a venue that Molly connected with right off the bat; a Wisconsin-themed Packer bar called the Casual Pint. 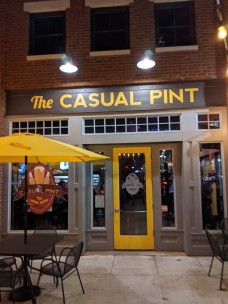 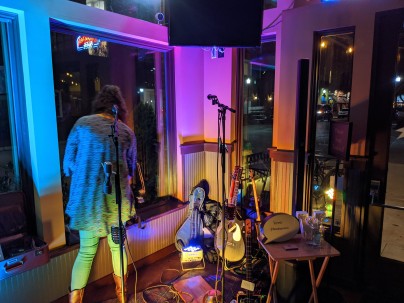 We found out from the bartender that Huntsville is a bit of a melting pot. With NASA, Missile Command, and the Biotech Initiative in town, there are a whole lot of highly educated people that come to Huntsville for work from all over the world. We made friends with a music lover from England and an artist from West Virginia, to name a couple of folks from a really fun audience.

Remember how I said that Molly’s grandparents told us some stories that tied in with one of our stops? It just so happens that they got married more than 65 years ago in Corinth! Back in those days, Kentucky had a 3 day waiting period for a marriage license, and since Mississippi didn’t, a lot of young couples would make the short drive down to the Alcorn County Courthouse to get hitched. On May 18, 1954, a young Glenn and Shirley did just that, and Molly got to visit the place where it happened. 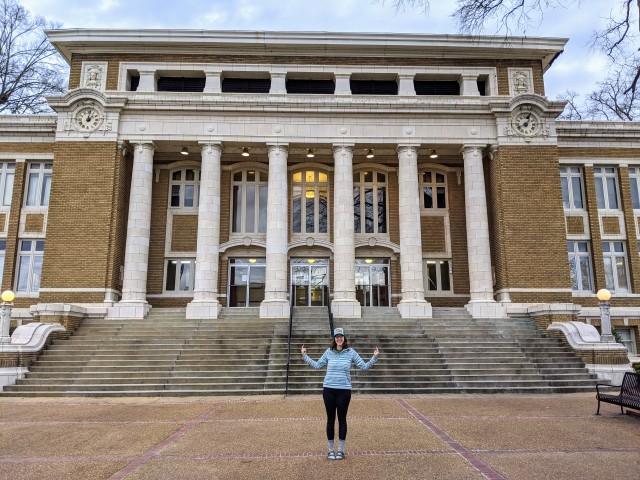 Corinth was really good to us. First of all, the Daily Corinthian was kind enough to run a great article about our show at SMITH. We absolutely loved the venue. Great food, (Shrimp and Grits!) atmosphere, and a bunch of super-savvy music lovers sitting up front. It was really cool to be surrounded by John Prine and Jason Isbell fans! 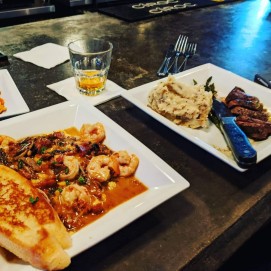 This was also my favorite campground of the week, Cross City RV Park. Jim, the owner, is so nice and welcoming, and everything was top notch.

Our hearts were full when we left Corinth, but they were about to grow another couple of sizes. Our next show was at the brand-spanking-new Shelby County Arts Council facility. Home to classrooms, art galleries, and a BEAUTIFUL theater, we got this gig thanks to a friendship that goes back to the International Blues Challenge in Memphis. Bruce Andrews and George Dudley play together in a duo called 2Blu, and we all made the IBC Finals together. Bruce was kind enough to hook us up with the Sassy Brown Band, an awesome group of musicians.

The show was SOLD OUT! We got to play for 200+ people in an absolutely magical room, and then hear Sassy and the boys tear up some Patsy Cline. We even sold a cigar box guitar and a stompboard! This is highlight-of-the-year type stuff.

Shout out to Bruce and the entire SCAC for making this so special, to George for dialing in the sound so well, the Sassy Brown Band for being gracious enough to share the evening with us, and Candlewood Suites of Alabaster for sponsoring the show and giving us and Charlie a great place to stay on a chilly night. 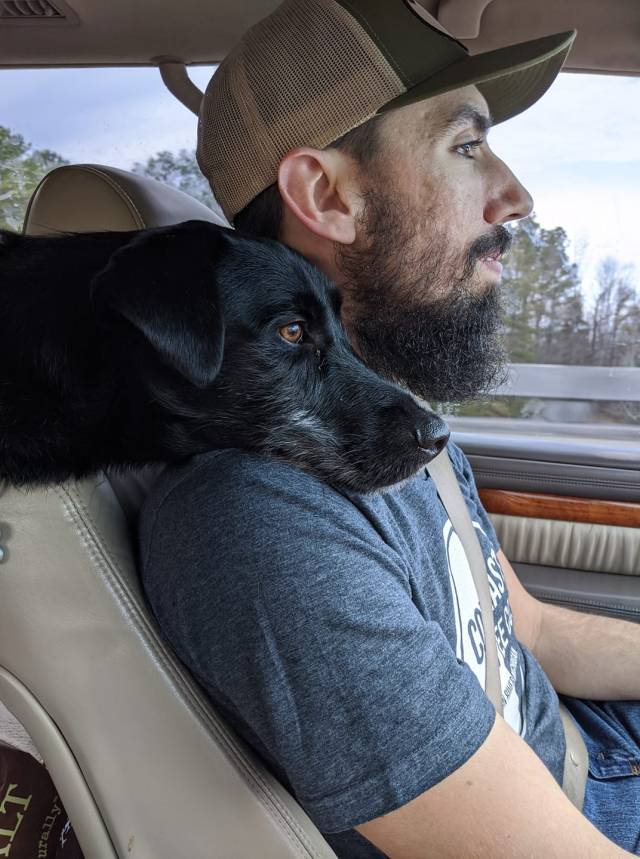 His favorite city was DEFINITELY Chattanooga, because he got to go to a DOG BAR. Right across from our venue was a terrific place called Play Wash Pint. After our gig, we got to turn Charlie lose and play some cornhole while he ran around with some doggo friends.

Shout out to Charles, our soundguy, for telling us about it, and for making us sound good at a really cool brunch spot, the Flying Squirrel. It was such a perfect vibe on a sunny Sunday, and it all came together perfectly. We set up camp at Holiday Travel Park, arrived in time to hear some soulful tunes from Courtney Daly, and devour some farm-to-table eats before our set. It was such a cool setup, with a listening area right around the upstairs stage and speakers playing us through the rest of the downstairs and outdoor dining areas. 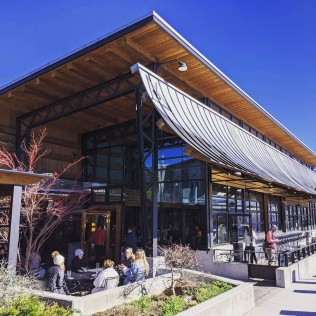 Stop #7: Franklin, TN
Our final stop of the week is in Franklin! We’re here to visit Molly’s sister and her wonderful family, and also play a cozy little dive bar called Kimbros Pickin’ Parlor. This downtown spot has hosted some great ones, from John Prine to Emmylou Harris. It was about 20 degrees and snowing when we hit town, so we were grateful to have a crowd of family, friends, and friendly new faces come out to see us. (And, to be staying indoors instead of out in the camper when the show was over!) 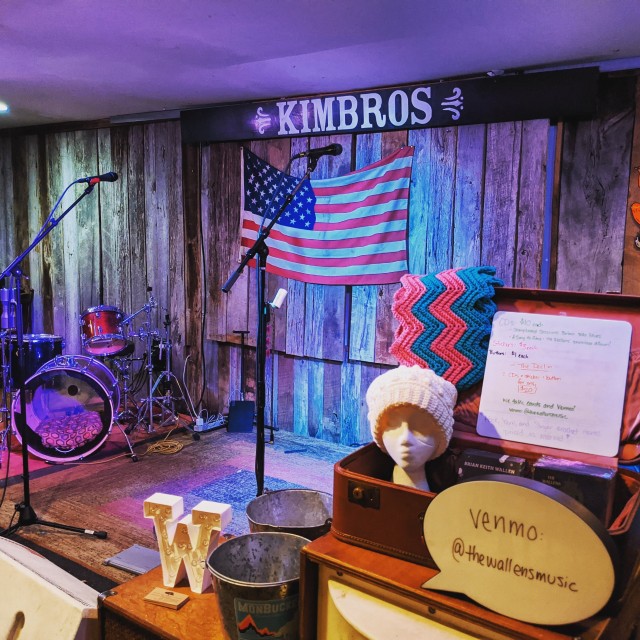 It was everything you’d want a Nashville-area dive bar show to be; fun, loose, and filled with laughter. We played a bunch of bluegrass and Prine tunes, and had folks from Mississippi, Colorado, Wisconsin, Kentucky, Ohio, Michigan, and beyond sing along with us on a few of them. Daniel and Brentley did a great job on sound (we’ve been blessed with some wonderful soundpeople on this tour), and it was the perfect way to close out our first week.

We’ll spend the next few days resting up, spending some quality time with family, and then we’ll head for Arkansas later this week. Stay tuned!